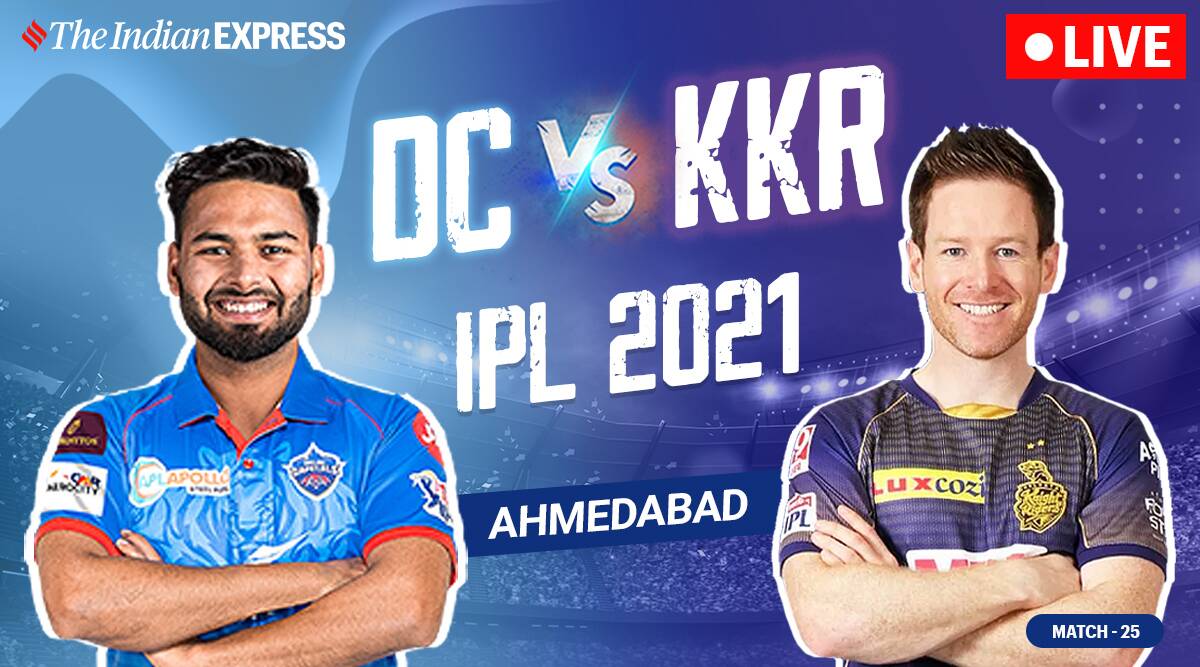 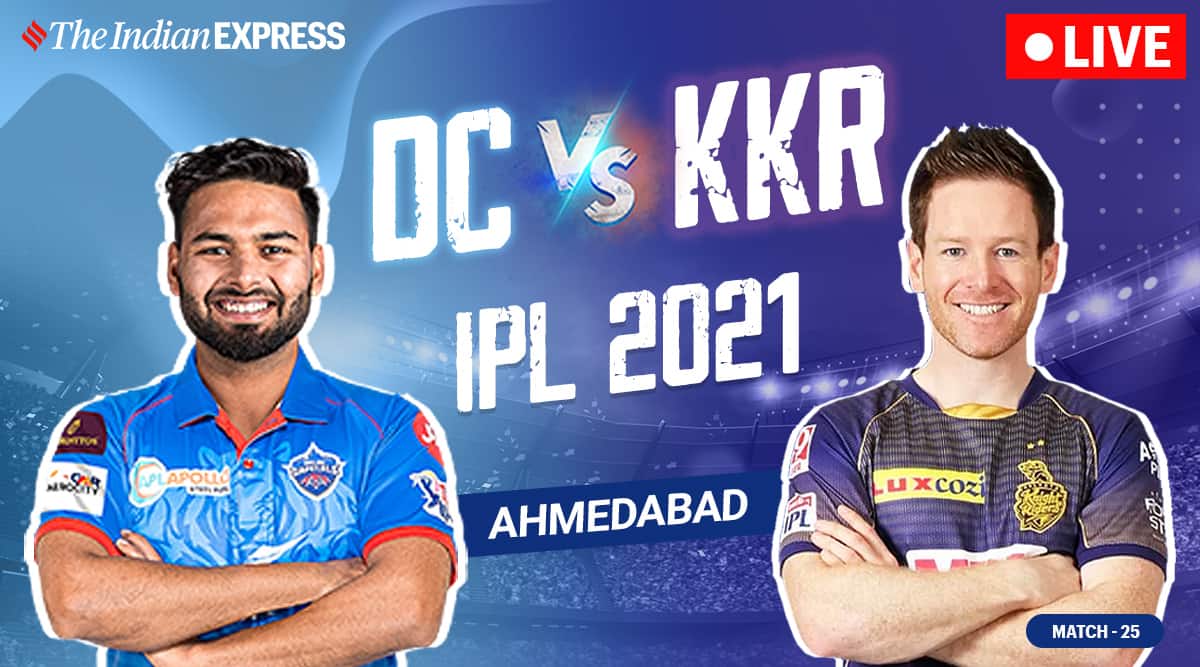 IPL 2021, DC vs KKR Highlights: The match was held in Ahmedabad.

IPL 2021, DC vs KKR Highlights: Delhi Capitals (DC) sealed a comfortable seven-wicket win against Kolkata Knight Riders (KKR) in the ongoing IPL 2021 at the Narendra Modi Stadium in Ahmedabad on a double-header Thursday.

Sent to bat first, KKR got off to a decent start on the back of Shubman Gill’s 38-ball 43. Eoin Morgan’s men faltered in the middle-overs yet again but Andre Russell’s late-innings blitz guided KKR to 154/6 at the end of 20 overs. Axar Patel and Lalit Yadav both scalped two wickets each. Chasing, Prithvi Shaw (82) and Shikhar Dhawan (46) stitched together a 132-run opening stand which made it quite comfortable for DC. Rishabh Pant and his men reached the target of 155 with 21 balls to spare in the end.

Despite the late wickets, the contest never got out of Delhi’s hands. Stoinis brings up the winning runs for his team… a four off Prasidh. Pant’s side reach the target with 21 balls to spare and now they have 10 points this season. DC: 156/3 (16.3 overs)

A morale-boosting win for @DelhiCapitals as they outplay #KKR to register a big 7-wicket win and they do so with 21 balls to spare. KKR could never recover after the early onslaught from @PrithviShaw. https://t.co/GDR4bTRtlQ #DCvKKR #VIVOIPL pic.twitter.com/fSBxxVkUBD

Cummins at it again! The Australian pacer scalps his second of the night off a catch by Rana. Shaw departs on 82. Three balls later, Delhi lose another wicket… Pant’s (16) stay is short-lived as he gets caught out with some help from Mavi. DC: 150/3 (15.5 overs)

Pant comes in the middle and hastens things up! He wastes no time in taking on Prasidh and slams a four over midwicket. On the next ball, Pant attempts a wild pull and it flies off the top-edge for a six! On the other end, Shaw’s on 82*. DC: 146/1 (15 overs)

Finally a breakthrough, albeit too late! Cummins comes back into the attack, and after getting pulled by Dhawan for a six, he comes out on top. He traps Dhawan (46) between the wickets with what was initially a full toss. Up next, Pant. DC: 132/1 (13.5 overs)

Even the spin-combination is failing to find a breakthrough although the match looks all but over. Narine continues his spell and he gets hit for a massive six by Shaw (79*)… a half-tracker at the stumps, pulled over the square leg boundary. DC: 123/0 (13 overs)

Delhi are in complete control now. Chakravarthy returns to the attack but there’s hardly any change in the script. Shaw (63*) maintains the momentum by hitting the spinner for a six. Gill tries his best but the ball goes through his fingers. DC: 95/0 (10 overs)

With a single on his 18th ball, Shaw (54*) becomes the joint second-fastest DC player to a fifty in the IPL! He doesn’t let up for even a second as he smacks Cummins for his tenth boundary of the innings later in the over. Dhawan’s on 25* off 27. DC: 81/0 (8 overs)

Last 12 balls – 26 runs. Very fast but slow if you are @PrithviShaw because
First 6 balls – 24 runs.
What a super-control knock.

Shaw (48*) and Dhawan (17*) help Delhi achieve the highest powerplay score by any team this season. After hitting Prasidh for two boundaries, Cummins comes into the attack. The pacer stalls the pair and concedes just a single in his over. DC: 67/0 (6 overs)

The Delhi openers have a bit of a reputation of starting things with aplomb… and they continue to do so tonight. Narine comes into the attack and Shaw (44*) welcomes him with a mighty six, which brings up the fifty-run stand in just 22 balls. DC: 57/0 (4 overs)

Morgan brings Chakravarthy into the attack early on and Shaw seizes the opportunity. The opener finds the gap at point for a four and helps in getting 10 runs in the over. Next over, Dhawan (10*) joins the party too with a four against Prasidh. DC: 43/0 (3 overs)

Prithvi Shaw and Shikhar Dhawan come out to open the chase for Delhi, while Shivam Mavi has the ball for Kolkata. The pacer starts with a wide and on the first legal delivery, he gets hit by Shaw (24*) for a four. Five more follow after it. DC: 25/0 (1 over)

DC don’t want Russell on strike! They want Cummins! Only singles can be managed off the 4th and 5th balls. Russell on strike for the last ball. The last ball is a six, crashed over the bowler. Russell finishes with 45* off 27. KKR get to 154/6 after this late Russell blitz.

Avesh Khan bowls the 20th. Cummins faces. Dot ball. Russell walks up to his partner to have a word. ‘Get off strike’, Harsha Bhogle mutters. Cummins crashes a four through covers off the 2nd ball. Russel gets back on strike with 3 balls left. He has gotten 22 off the last 7.

Rabada bowls the 19th. Big over incoming. Russell is beaten for a dot. Russell then heaves and just manages to find the gap. Four! Another dot ball to follow. This is the definition of ‘Hit and Miss’. Another smash to follow! Big six that crashes into the sightscreen.And the last ball is another big six over long on! Russell wins this battle – 18 runs off the over.

Cummins now joins Russell. Takes a couple of balls to gauge Axar’s length before slotting a cover drive through the gap for two. Axar finishes with 2/32. Avesh Khan bowls the 18th. Cummins gets a tickle to go past short fine leg for four. Avesh then roars back with a few perfect yorkers that go through under Cummins’s bat. Russel gets strike back after a while. And muscles a boundary through cover.

Axar returns to bowls his last. Karthik smashes a four off the first ball. Goes for a reverse sweep off the 2nd ball, misses it and is struck on the pad. Gone for 14. KKR lose Karthik.

DK tries a reverse sweep but is hit on the pad. Big appeal and he’s given. He reviews, but it looks like DK has accepted his fate and it stays out!

Ishant Sharma returns to bowls the 16th over and Russell finally gets hold of one overpitched ball. Blasted over long on. Russell’s first six. Karthik can’t time his attempt at a heave, but both batsmen have found the fence once each now. How much more can they add in the last 4?

Rabada bowls a tight 14th over, Russell can only drill away his heaves for ones to the outfield. DK and Russell have a long discussion as there is a TimeOut. Can this duo recover this innings from this mini-collapse KKR have had? Axar Patel bowls after the break. More tight bowling. Singles from DK and Russ. Loud exclamations from Pant behind the stumps. DK swings and connects – the over ends with a six to deep midwicket.

On his 33rd birthday, he completes 6k T20 runs. Hopes of #KKR fans are once again pinned on him!https://t.co/iEiKUVwBoy #DCvKKR #VIVOIPL pic.twitter.com/pjWQRNMwb0

Now, it’s Gill’s time to walk back! Avesh bags his first of the night after Gill (43) lofts a slower delivery to wide long-on… straight into the hands of Smith. The last three overs — nine runs, three wickets, and zero boundaries. Disastrous. KKR: 82/5 (13 overs)

One young bloke appreciating another after dismissing him, is what @IPL is all about 💙#YehHaiNayiDilli #IPL2021 #DCvKKR pic.twitter.com/MFFyrNoWkz

Delhi have caught Kolkata sleeping in Ahmedabad right now! Lalit’s selection pays off as he comes up with two vital scalps for his team. First, he sends Morgan back to the pavilion on a duck with the help of Smith’s catch. Two balls later, the spinner completely castles Narine! The off-stump goes for a toss as Kolkata sink further. Gill’s still alive on the other end on 39*. KKR: 75/4 (11 overs)