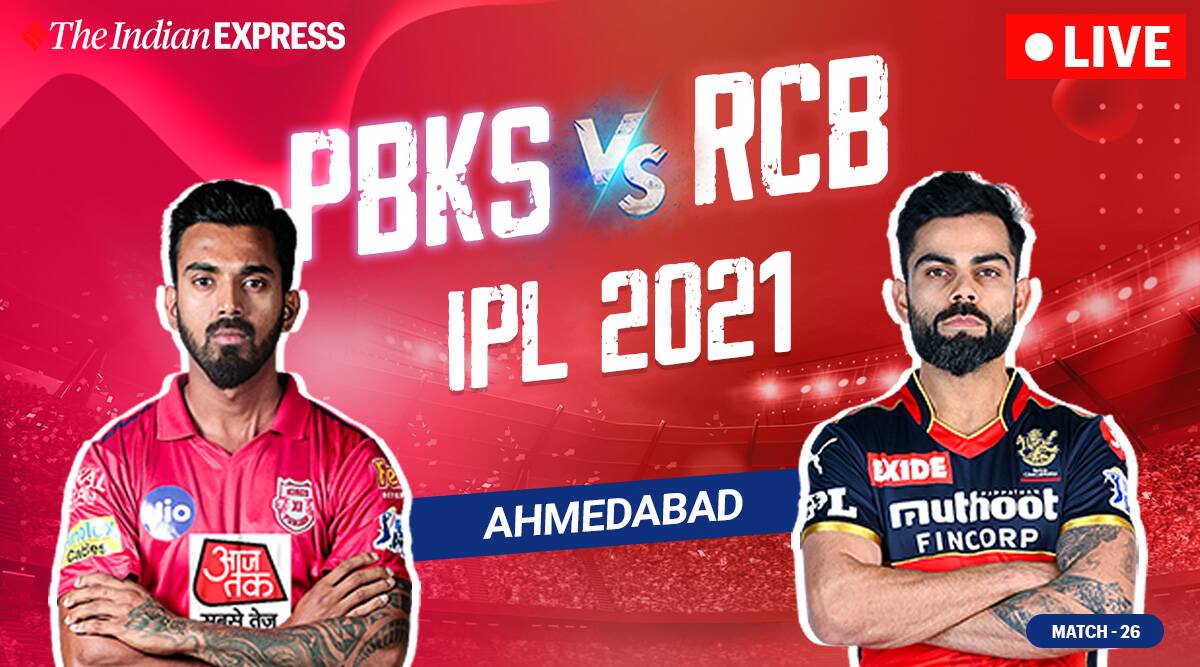 IPL 2021, PBKS vs RCB Highlights: The match was held in Ahmedabad.

IPL 2021, PBKS vs RCB Highlights: Punjab Kings (PBKS) moved up to fifth position in the points table after beating Royal Challengers Bangalore (RCB) by 34 runs in the ongoing IPL 2021 at the Narendra Modi Stadium in Ahmedabad on Friday.

Sent to bat first, PBKS got off to a brilliant start on the back of KL Rahul’s 91* and Chris Gayle’s 46. Although they suffered in the middle overs, they managed to post 179/5 at the end of 20 overs. Chasing, RCB were put under pressure right from the start. Virat Kohli (35) and Rajat Patidar (31) tried their best to keep their team in the contest, but Harpreet Brar (3/19) and Ravi Bishnoi (2/17) sealed the win for PBKS as their opponents were restricted to 145/8 at the end of the second innings.

Some games you win, some games you don’t. What’s important is to keep our spirits high and come back stronger than ever.

Meredith has a smile on his face but is limping as he walks off. An anti-climactic end to what was a great night for him. Shami will finish the 20th over. Har-shall continue the carnage against him. Another four crashed over third man. And is then caught in the deep. What a catch! Bishnoi takes a one-handed catch diving forward.

46 runs the deficit as the last over comes up. Meredith comes back to bowl his last. Jamieson starts the over with a six over deep midwicket. Off a 145 kph delivery. Next ball, Meredith gets hit by the shot on his kneecap. Painful blow! He is struggling off. Riley Meredith is walking off.

Harshal Patel will not give up. Crashes Jordan for a four over third man to start the 19th over. Another four crashed through the gaps immediately. Jordan now tightens his length. Harshal smashes a six over the bowler’s head. Not much left in the match for RCB but net run rate, but Harshal Patel sure is proving his credentials as a handy lower order bat.

Appeals of LBW against Harshal Patel but that was missing by a bit. Bishnoi finishes with 2/17 in 4. Jamieson and Harshal can only get singles as Jordan bowls the 17th over. Shami returns to bowl the 18th. Harshal smashes a six, Jamieson follows with a four. Shami goes for 15 in an over, but RCB need 63 off the last 2.

Another wicket! Now the two spinners combine. Bishnoi gets a mark on his wickets column. Shahbaz swings for the hills but only finds the star of the night Harpreet Brar at extra cover. All a matter of time for Punjab Kings now it would seem. There is a TimeOut. First ball after the Timeout, there’s another wicket! Sams is bowled. Now Bishnoi is on a hat-trick ball.

Shahbaz Ahmed has joined Patidar in his struggle. Chris Jordan is introduced into the attack. Shahbaz gets a lucky edge to go for four behind the stumps. Patidar’s struggle finally ends. His innings ends with a skier. He goes for 31. His struggle became RCB’s struggle tonight.

Brar finishes with 3/19 from 4 overs. Bishnoi has 0/13 in his 3. Punjab’s spinners have derailed RCB after some early pressure by their pacers. Patidar finishes the 14th over with a four and a six. Could he possibly turn his struggle around? Could he pull off a Tewatia?

AB de Villiers faces the hat-trick ball. Dot ball. RCB are in sudden disarray. They need an ABD miracle tonight. Bishnoi blitzes through another rapid over, sullied by a wide off the last ball that also beats the keeper. Now Harpreet Brar gets ABD! Harpreet Brar never got an IPL wicket before this. Today, he has had Kohli, Maxwell and ABD. A night he will never forget.

2 in 2! Glenn Maxwell is bowled out for a duck! Brar on a hat-trick.

The pressure tells on Kohli! He steps out to Harpreet Brar and again misses the turn. That’s Brar’s first wicket of the season, and what a big wicket. Kohli falls for 35.

ABD, seen padded up at the boundary, seen stretching in anticipation. Maxwell, also padded up, also prowling near him. The required run rate is now 11. Kohli scans the field for gaps as young Bishnoi bowls the 10th over. Kohli steps out and misses the ball. Pressure builds even more. Patidar steps out to Bishnoi too, and he misses too! The ball somehow misses the stumps somehow. Kohli again steps out, and can only muffle the ball as the ball grows big on him.

Frustrations continue for RCB. Rajat Patidar, who has found the fence only once in 19 balls, is helping PBKS mount pressure. His slow strike rate means this partnership is going at just about a run-a-ball. Maxwell and ABD left in the tank, but RCB need to go now!

After the end of the powerplay, Kohli (28*) decides to up the tempo a bit… with a six against Harpreet. In the next over, Chris Jordan comes into the attack and puts Patidar (13*) under some pressure with some in-nippers. Just four off the over. RCB: 50/1 (8 overs)

Kohli and Patidar make it to the end of the powerplay which has largely been dominated by the Punjab bowlers. RCB: 36/1 (6 overs)

Ever since Padikkal’s dismissal, things have been rather quiet for Bangalore. Shami and Meredith continue to put some pressure on the pair, but Patidar finally breaks the no-boundary streak of 15 balls with a stunning four to the wide of mid-on. RCB: 32/1 (5 overs)

An early breakthrough for Punjab! Meredith completely destroys Padikkal’s stumps after the batsman charged down the wicket. The ball is just too quick for the Bangalore opener to handle. Padikkal walks back on 7. Up next, Patidar. RCB: 19/1 (2.3 overs)

Virat Kohli and Devdutt Padikkal come out to start the chase for Bangalore, while Riley Meredith has the ball for Punjab. The bowler has a decent start, conceding just two singles in the first four balls. But Kohli ends the over with a classy four! RCB: 7/0 (1 over)

After picking up some momentum by hitting Siraj for a four in the penultimate over, KL Rahul (91*) completely goes berserk in the final one against Harshal. He finds the gap for a four, hits a massive six and then adds another four runs to his tally with a brilliant scoop over the wicketkeeper. On the last ball, Harpreet Brar (25*) adds the cherry on the top with a six! PBKS: 179/5 (20 overs)

36 balls without a single four/six… but Harpreet (17*) comes clutch! The all-rounder takes on Harshal and lofts one cleanly over the infield. He follows it up with a six, releasing pressure off Rahul’s (71*) shoulders. 18 runs off the over. PBKS: 150/5 (18 overs)